What would it mean to practice design in the knowledge that the well-being of humans, and non-humans, is inter-connected? A recent design workshop at Milan Polytechnic explored just this question: practical ways to make cities hospitable for all of life, not just human life. 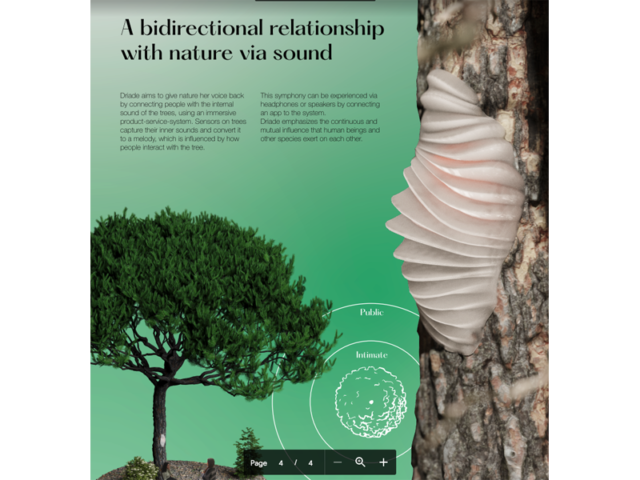 Students were challenged to design an artefact, an intervention, or an experience, from one of these three aspects of green infrastructure:

The Driade project (see poster, above) enables bidirectional relationship with nature via sound. With the aim of “give nature her voice back”, the platform connects people with the internal sound of the trees using non-invasive audio sampling. An immersive product-service-system using sensors captures the inner sounds of trees and converts these to a melody shapes how how people interact with the tree. This ‘symphony’ can be experienced via headphones or speakers by connecting an app to the system.

A makeshift microscope (above: magnifying laser lenses attached to a hacked smartphone) allows urbanites to collect and observe microbiactive samples. An app allows these citizen scientists to record and log their microscopic explorations. Artificial Intelligence software helps them recognize and classify the observed species in an online deck. This archive, when linked to educational information, further amplifies perception of the unseen, and enriches the interaction with previoulsy unknown lifeworlds.

Although many animals have proved expert at adapting to city life designed by humans, and there can be more biodiversity in cities than outside, bird populations are still in decline. This Bird Hospitality Service began with street-by-street exploration by the design team, followed by design ‘mood boards’ from the bird’s perspective. The resulting service journey blueprint – which treats birds as client/user – combines hardware (principally bird boxes) with sensors. The bird boxes can be hung from trees or attached to balconies.

To combat air pollution in Milan – a city with the highest ownership in Europe – the idea of Pop Up Garden is to idea occupy spaces stolen by cars, with plants. The team’s modular planter system would complement the city’s existing plan to plant three million trees, and could also be used in combination Miyawake micro urban forests being planted by citizen groups in many cities with support from the Sugi platform.

Intrigued by their discovery that microionrganisms can thrive when exposed to music, light, and temperature, Stanza is a proposed museum installation that explores different ways that humans can influence biodiversity – or not. The three ‘rooms’ in Stanza features agar on glass – a growing medium for microbacterial cultures. Each room displays what kinds of transformation happens to microbial communities when exposed to different degrees and types of human intervention

Biodiversity is not confined to national parks and wildlife reserves. On the contrary, there is often more biodiversity in cities than in nature reserves and protected areas outside them. These lifeworlds exist at multiple scales – from microbiome, to bioregion. But they have been hidden from us, during the modern age, in two ways.

The first source of invisibility is its small size: Ninety nine percent of all life on earth – the microbial universe – is invisible to the human eye. The second reason we’re disconnected from life is called infrastructure. We’ve invested huge effort and resources in hiding – and expelling – metabolic materials and processes that permeate our bodies, waterways, air, and soils.

We call these living materials waste, and keep them as far away from us as as possible – underground, encased in concrete, out-of-town. The result has been described as a ‘metabolic rift’ – in our cognition, and in our cities – that is a key driver of the biodiversity crisis that is now upon us. Out of sight, out of mind.

What would it mean to practice design in the knowledge that the well-being of humans, and non-humans, is inter-connected? This question sounds radical – but it is not utopian. Millions of citizens already inhabit cities alongside other humans, animals, insects and plants, soils and machines.

The Llfeworlds workshop was hosted by Milan Polytechnic School of Design @polimi The workshop instructors were John Thackara, Roberta Tassi, and Caterina Castiglioni. Complete results will be published soon by Polimi.

© The John Thackara blog and website is licensed under a
Creative Commons Attribution-NonCommercial-NoDerivs 3.0 Unported License.
Permissions beyond the scope of this license may be available at john [at] thackara [d o t com], 1993-2022